Lately I’ve been thinking a lot about boxes.  The kind we build for ourselves.  To shelter us, to protect us, to entertain us, to separate or to bring us together.  To hold our stuff, to differentiate ourselves culturally or economically.  To provides homes for our government, our commerce, our rich, our infirm, our indigent, our outlaws.

We build boxes to glorify ourselves, our wars, our victories over other humans.  And we build glorious boxes as a home for The Creator.  I have seen these boxes.

Humans have a strong sense of place.  We ascribe sacred significance to the places we build because they commemorate who we are as a people and who we believe The Creator to be.  I have been in some of these boxes and they are exquisite.  The European architects really knew how to create a sense of space reaching to the heavens, all under a roof and within walls.  Fabulous light comes into these spaces through colored glass depicting significant moments in the mythology of the believers.  The Hebrews built a temple to Yahweh that was the architectural marvel of its day.  The space within St. Peter’s Basilica is a place where man did indeed reach up and out to God to create a suitable residence for the almighty or at least in demonstration to other humans that the home of God should be a palace of the highest order.  The cathedrals of Europe are true works of art and represent the highest genius and ingenuity that humans developed, and they represent place… sacred space… inspiring awe in those who enter their walls.

Humans have long striven to build a house for The Creator, to set aside a place, or a box which they could designate as sacred space where they could come meet God at the time appointed for their rituals.  But here’s the thing… 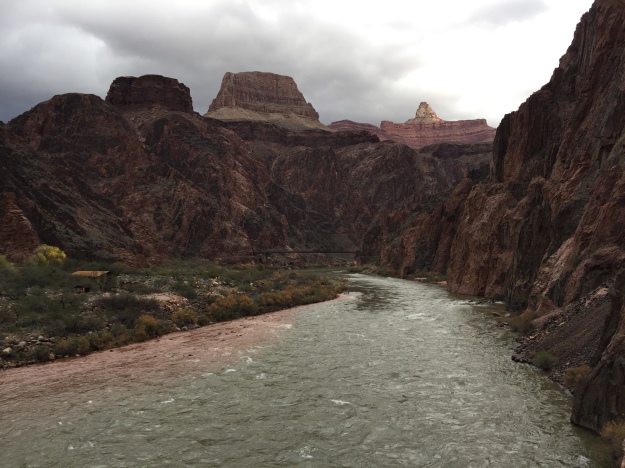 The mighty Colorado River in the most grand cathedral of them all, The Grand Canyon

Whenever humans encountered The Creator in a significant moment, it was often in the wilderness.  Elijah, Moses, Jesus, Paul, all had life changing encounters while they were outside, not inside a box.  Yahweh met the first humans in the Garden, walking in the cool of the evening as He willed.

The Creator cannot be confined to place.  Yahweh chooses where and when the encounter takes place.  The Native Americans knew this.  Their being was inextricably tied to the earth itself.  The idea of owning property for oneself was foreign and certainly, it was The Creator who held deed to the earth and all who walk upon it.  How the Hebrews missed this is a mystery.  They were relentless in their desire to build a home for Yahweh and even confined him to a literal box: the ark of the covenant.  They passed that sense of place on to us and we have been fighting about it ever since.

If it is a significant moment, humans will mark it in space and time by building a monument.  It becomes theirs.  A space to be celebrated… and defended at all cost.  The ultimate sign of conquest is symbolized in the destruction of a culture’s sacred spaces.  It turns out that space and place are what define us as people, as cultures, as civilization itself. But space and place cannot last.  If humans don’t destroy their own sacred spaces, the planet eventually decides it’s time for change.

The Creator lives outside of time and space.  Our encounters are not chosen by us.  We can put ourselves in places free of distraction, which usually do not include walls, where we can become attuned to the natural rhythms and songs of Creation.  We can walk among the tree people to learn what they have to teach us about time and patience and we can watch our animal brothers glorify God by simply being who they are.  And if we are chosen for a blessing, we may get an invitation to a moment, an encounter, a vision of eternity.

1 thought on “The Boxes We Build”