It is now 4 days from the time I board a plane for Reno, rent a car and drive to June Lake outside of Yosemite.  I am finalizing my gear and packing everything up for the trip.  The last unresolved decisions involve technology and I have brought that process to a close.  Here is the tech that will accompany my 211 mile trek on the John Muir Trail; 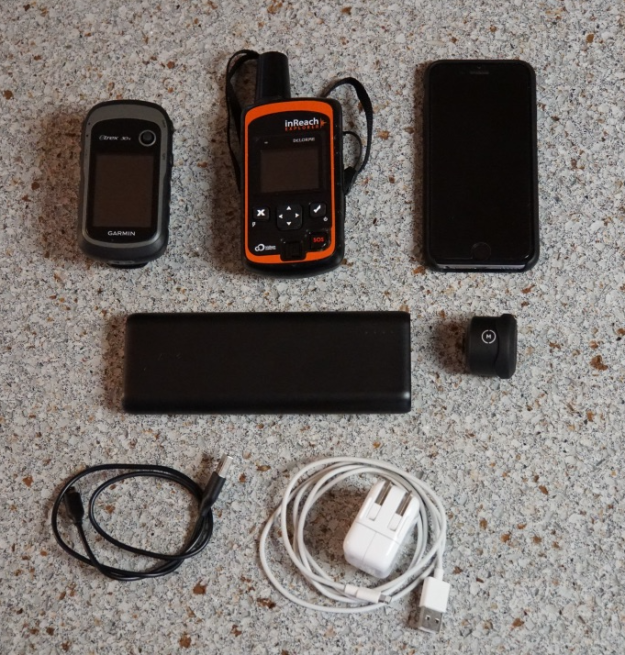 The InReach Explorer has two key functions; satellite texting and SOS emergency communication.  The texting, although crude in the user interface, will be the only way I have to communicate in the remoteness of the JMT.  All my research indicates the trail is generally beyond the reach of cell tower signals.  The InReach will hold a charge for about 4 – 5 days of hiking. It will track my progress and post to a website where friends and family can follow.  Weight: 6.8 oz

This is a brand new edition to my gear set.  I wanted GPS capability that was not available in the InReach but my Garmin fenix 3 watch was not going to make the cut, primarily because it only holds a charge for 2 days of full hiking and needs to be recharged.  I chose the Garmin Etrex 30x for its basic GPS functionality and the fact it runs on AA batteries.  The specs indicate it will run for 16 hours so I’ll carry extra batteries.  My testing has proven the device to be reliable and easy to use.  Plus it will upload results to my Garmin Connect website, which is what I have been using now for years.  Weight:  5.7 oz

The iPhone will be my camera, saving  about 4 lbs of camera gear.  The iPhone took great pictures in the Grand Canyon so it should be fine.  I found a telephoto lens that is small and weighs nearly nothing.  I have maximized storage space by getting rid of most apps (including email), pictures and media leaving about 54 GB for photos and video clips.  I don’t believe the empty memory space save any weight.  I could not find how much a GB weighs anyway.  In airplane mode, the battery should last 4 or 5 days. Weight:  7.8 oz (w/ lens)

The iPhone and the InReach Explorer will need to be charged at least once before I get to Muir Trail Ranch and probably twice between there and Mt. Whitney.  I researched a number of websites and blogs, considering solar chargers and high density power chargers.  One has to learn how these devices are rated and fortunately, the hiker community has developed a bit of a standard of how many times you can charge your smartphone.  The chargers are specified by the number of milliAmp hours, but one thing to note, the airlines have a restriction on lithium batteries measured in Watt hours, which is the total volts multiplied by the Amp hours.  The limit is 100 Watt hours.

I opted not to use a solar charging system.  The ones I researched indicated you needed to charge the battery a full day to get 1 smartphone charge.  With two devices, I did not want to run the risk that they both ran down on the same day.  Plus, many of the reviews indicated that weight was a bit of an issue when you count the flexible solar panel and the battery in the system.

That leaves the lithium battery chargers.  I found these are typically rated in milliAmp hours (mAh).  A 7,800 mAh will charge a smart phone up to 3 times and weighs around 6.5 oz.    More is better right?  But bigger chargers come with more weight.

My choice ended up being the Ankar 20100, which is a 20100 mAh battery charger weighing in at 12.7 oz.  The literature boasts 7 charges of a standard smartphone.  It has two USB ports making it possible to charge two devices at a time.  Running the math, it registers a 72.6 Wh capacity, which should not be a problem for the FAA.

A USB for the phone and the InReach, plus a 10W power adapter weigh in at 3.5 oz.